Indrawanto is exploring  palm tree nectar  into various shapes and types of sugar. Because it is made from sugar palm that grows naturally in the mountains, no chemical fertilizers and pesticides, plus processed following the organic principles, he was sure it would be accepted as organic sugar. As it has referred as a waving palm country, actually Indonesia could be also called a palm lined country. Because of so many aren palm tree thrives in a wide range of its mountains, mostly a non-crop cultivation or it has just grown without any human intervention.

It is also one of the starting points so why Indrawanto and his wife, Evi Indrawanto, when three years ago started Diva Maju Bersama producing granulated arenga palm sugar or gula semut aren in Bahasa Indonesia. According to them the palm raw materials are easily obtainable around the country.

He founded his company with an initial investment of 200 million rupiah. Indrawanto cooperation with aren farmers of West Java, which supply 20-30 tons of sugar each month. It is a small scale industri, moves from the home area in Serpong , Tangerang where he lived in, he hired four employees. He diversity the products ranging from mold, granulated until liquid palm sugar.

Now as you can read from one of Arenga’s blog, they can produce 30 tons of sugar monthly which half of it has absorbed by various food industries. The clientele are 6 factories that spread in Tangerang and Jakarta. While for retails he set prices of Rp 7,500-Rp 9,000 per kg for mold and the powder ones Rp8.500-RP. 10. 000 per kg. (Note : thi is the price of 2008).

There is another reason why Indrawanto so excited to pursue this effort. There is a growing demand from people who want to live a healthy life by consuming only products made from organic or natural raw. Of course Arenga palm sugar has a tendency to answer it. Because the sweetness levels 80% lower than cane sugar. As it has already mentioned above that the habitats of palm tree in the mountains is growing organically, how unspoiled nature they are, that is why it doesn’t an overstatement when he called his product as an organic sugar.

In an exploring of the aren palm, Indrawanto is trying produce various forms of sugar. He, for example, provide palm sugar for food industries in bulk packaging of 10 kg each. Retail packaging in aluminum foil pouch 225 gram. Arenga also available in liquid packed in 650 ml glass bottles. And, because this product still needs to be introduced intensively- at least when we compared it with white sugar -Indrawanto diligently follow of various food exhibition. Including the recently participated in the Halal World Expo 2007 held in Abu Dhabi National Exhibition Centre – United Arab Emirates. 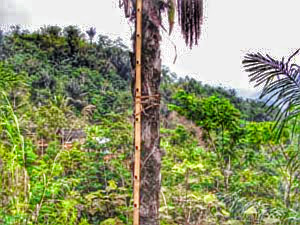 The most interesting when exploring of palm sugar business is how the raw material must be taken through the mountains that are less friendly nature. His wife, Evi, in her personal blog wrote that they manage black sugar palm tree that grows in hilly areas, slopes and slope-air valleys. “Making palm sugar requires a hard work in term of truth. Each farmer household that has assisted Arenga has only able to tap the sap of palm trees to produce around 4 kg of sugar every day. From the tapping process to be molded or granulated of weighing approximately 8 kg sugar it has taken of 6.5 hours, “wrote Evi

To put lodong (bamboo tube to accommodate nectar ) to the top of the tree, sometimes more 20 meters high, the tappers need a hollowed bamboo ladder. “They have to climb this ladder 2 X a day, morning and afternoon because sap with natural preservatives can only survive for 12 hours. If it passing of time, they will turns into vinegar and have can no longer be processed into granulated palm sugar,” she wrote again. After that it took much longer for evaporating the water content which is an average of four hours per day.

And the so complicated process of presenting the material that physically exhausting, it only half the story. Therefore that is why Indrawanto should work closely with the farmers. He could not only thinking about how to package and market the product wich is loaded with the local wisdom. On the other side the business potential is quite large particularly when we considering this healthy sugar has been increasingly recognized by the market. As you knew they have been using in various restaurants, cafes, hotels and leading food factories. But on the other hand he still had to fight within the dosmetic issues such as how to keep the products can be readily accepted by the market standards.

The good news is that Arenga now has already known by its customers. Of course this is just a first step of the great ideals of Indrawanto that one day the whole world know of arenga sugar as a healthy sweetener from Indonesia . Unfortunately Indrawanto not willing talking more about the profits of his company. He just said that it was enough for the farmers welfare and developing further Arenga products. [EBEN EZER SIADARI]